Xiaomi Global Device Will launch With Google Phone and Messages apps instead of the-hose MIUI Dialer and MIUI Messaging apps. They announced that they Will Ship its upcoming smartphones with pre-installed Google phone and messages app in their Official Xiaomi Forum or Xiaomi Community. Google apps will be available on all “Global Xiaomi Smartphones”. 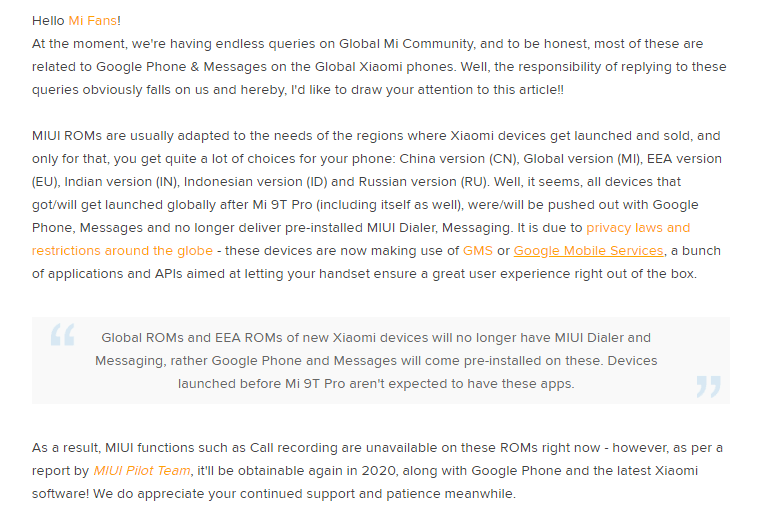 As if you Live in India, It Doesn’t affect you. Global Xiaomi Smartphones With a Global MIUI ROMs (EEA ROMs) EEA version (EU) comes with Google apps instead of MIUI Apps. This is Because of “Privacy Law and Restriction around the globe”, apart from EEA alongside Russia. Whereas India, Indonesia and other ROM will ship with default Xiaomi Apps.

Xiaomi says They have to pertain to Privacy Law and Regulation in European Union. However, Google Dialer app Doesn’t include a Most Important Such as Call Recording is One of them. Such feature like Call recording was not available in these regions but Xiaomi promises to enable the Feature via an OTA software update later.

Not to Mention, Google dialer app Doesn’t come with a lot of features like MIUI Dialer and messages. It Would be affected a lot of users and these Features Were not on google apps because of a lot of Privacy Reason that google has to follow globally but Xiaomi Will fix it later.

Read Also: Xiaomi, ISRO in Talks Over Support for NavIC to Smartphones in India

How to Remove Content Recommendation "Disable Ads" in Realme Phone