Vivo upcoming affordable Budget smartphone, the Vivo Y50 is about to launch. Where the device promotional image revealed some of the key specifications. Even the price of the Device has been confirmed ahead of official Launch.

The Vivo y50 has also been listed on Google Play Console earlier revealed, but now the promotion posted also unveiled spec sheet of the Device. The promotion post has collected from the vivo’s Cambodian page, where the price, colour variant and the highlight specifications mentioned. Let’s take q close look toward the Device, and it might be launched in the south-Asian market.

It will come with a 6.53-inch Full HD+ display featuring an ultra-O Display panel. Which a Super AMOLED Display offers an optical in-display fingerprint scanner. It would be a 19.5:9 aspect ratio providing Quite narrow bezels for an immersive experience. There exists a single punch-hole camera cutout for a selfie shooter placed on the upper left corner of the Device. Moreover, it will be the first smartphone from Vivo Y-series to using a punch-hole camera. The Device initially comes in two colour variant as the Black and sky Blue gradient colour options. 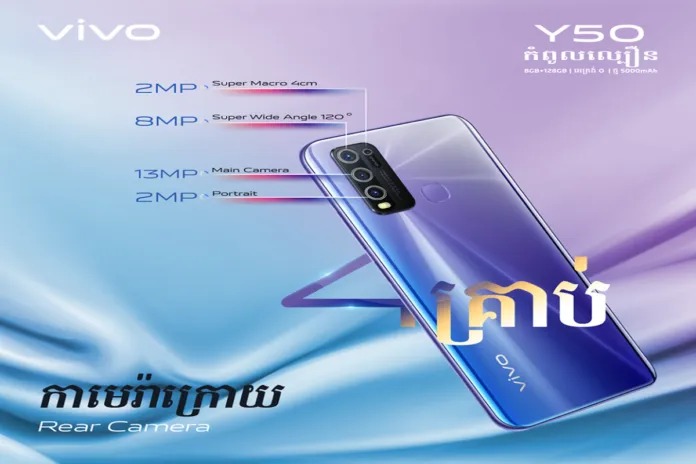 Under the hood, the Device has Powered by Qualcomm Snapdragon 666 Soc. The Chipset, coupled with 6GB and 8GB of Ram accomplished by a 128GB of Onboard storage. In addition to power, the Device has equipped with a 5000mAh Battery. It runs on Android 10 based custom skin FunTouchOS.

In terms of camera performance, the Device will a Quad rear camera module housing a 13MP primary + 8MP Super wide-angle lens of 120° Filed of View + 2MP portrait and 2MP macro capture with a distance od 4Cm object alongside a LED flash while the front will have an 8MP selfie shooter hidden inside the punch-hole camera.

The price of the Device is for starting 8/128GB is $249 conversation into Rs for Rs. 19,030. Thanks for being with us, we would like to know your valuable opinion and feedback if there is any query share with us in the comment section down below.