Samsung is Working on New Tablet With an internal Model Number SM-T307U. This Device Surfaced online because it Recieve a Wi-Fi Alliance Last Week. However, This Certification also Revealed Some of the Key Specification.

This Device Supposed to be Run on Android 9.0 Pie Custom Skin One UI and there Will be Solo Color Variant. However, The Device Chipset Will be paired with a 32GB of Onboard Storage. Meanwhile, the Device Support a Chipset Clocked Speed of 2.4GHz.

Furthermore, The Device Will Support a 5GHz Wi-Fi Network and to be Powered by 7nm Soc Suggested by the Model Number of the Device. The Cellular Connectivity Support for a 2.4GHz Dual-Band 802.11 a/b/g/n/ac Wi-Fi 5.

Similarly, The Device From the Model Number SM-T3xx Indicates the Series Belong to Samsung’s 8-Inch Tablet as We Seen Before. We Belive this Device Could be a Part of the Galaxy Tab A-Series.

Unfortunately, We Have Not Seen any Device With the Model Number SM-T307U For Other Region Expect US Market. This Device Expect to announced for Global Market not been Limited to the US. We have only this Much of Details as of Now. 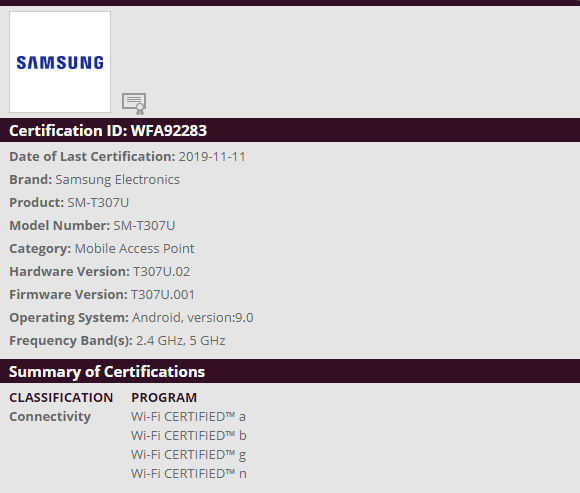 This Will be a Globally Sold Device Because the Database of WFA Seems Suggested to be an Unlocked US Variant. The Certification also Revealed the Model Number of Battery EB-BT307ABY but Don’t Mention the Capacity of the Battery. According to Some Rumors, the Device Might be a Galaxy Tab A Kids Edition (2019) Possibility launched Earlier Next Year 2020.

However, The Previous Galaxy Tab A Kids Editions Comes With 10.1-Inch Display With a 1920×1200 Pixel Resolution. Moreover, it Was Powered by Exynos 7904A Soc Clocked at 1.8GHz and Paired With 2GB of Ram and 32GB of Onboard Storage. Further, You can Expand Storage using MicroSD card Slot and be Housing a 5MP Selfie Shooter and 8MP Rear Camera Sensor alongside a 6150mAh battery. These Were the Specification for your Reference.

Read Also: Vivo V17 Reportedly Launch in India by the End of this Year, TENAA, FCC.