Samsung is pushing its mobile division to produce more 5G capable smartphone portfolios across the planet. Where the upcoming Samsung Galaxy 5G-enabled device would be Galaxy A51, likely to launch in South Korea. The support page for the device has been live on the Samsung Official website.

The device listed with the internal model number SM-A516N, it was one of the early devices to receive a support page. Not to mention, the device itself is expected to be launched to be released to other counties. Whereas we have a lot of countries and users, those potential buyers would buy the 5G enabled devices. Moreover, the device should be launched in the United States and China. 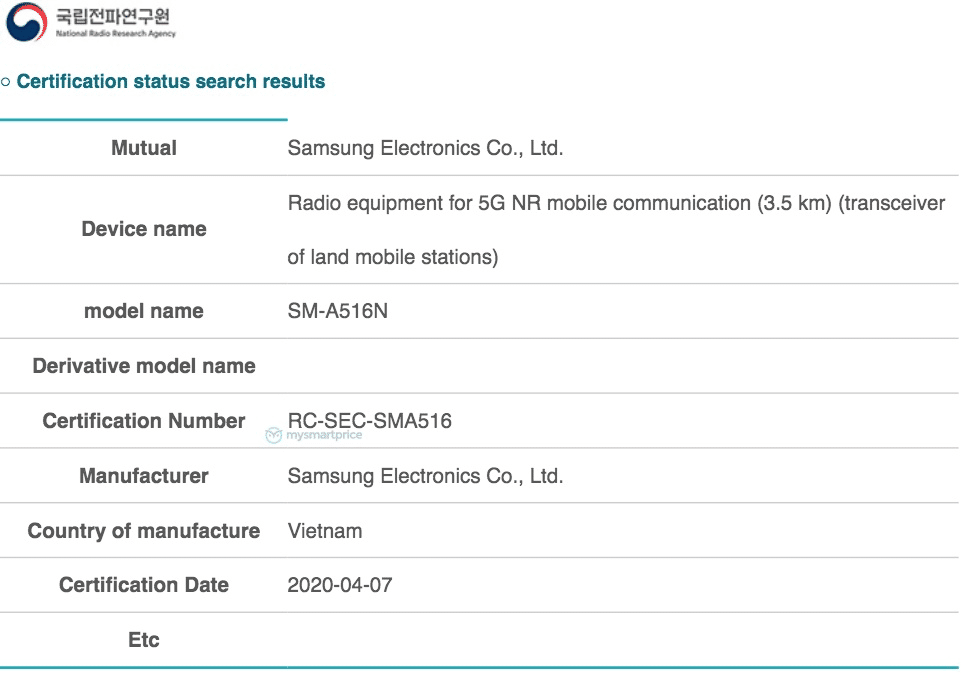 Under the hood, Samsung Galaxy A51 5G is to be spotted on Geekbench revealed the device. Whereas, it was powered by Samsung in-house Exynos 980 soc integrated with 5G modem for 5G connectivity. We have already seen the same chipset that has been powered by Vivo X30.

Under the hood, the system-on-chip paired with 4/6GB of LPDDR4X Ram and 8GB of UFS 2.1 Onboard storage. Furthermore, the device is to be run on Android 10 based OneUI 2.0 out of the box.

In terms of camera performance, the device will come with a Quad rear camera module. Housing an 48MP Primary + 12MP ultra-wide angle lens + 5MP depth + 5MP macro lense. While the front having a 6.5-inch Super AMOLED Display featuring an Infinite-O Display offers a Full HD+ resolution. Additionally, there would be an optical in-display fingerprint scanner.

As for connectivity, it supports 5G, 4G, GPS, Wi-Fi ac, Bluetooth 5.0, NFC, USB Type-C port, and a 3.5mm headphone jack. Thanks for being with us, we would like to know your valuable opinion and feedback if there is any query share with us in the comment section down below. Stay tuned for more further updates in future on same