Redmi’s upcoming smartphone is Redmi 10X and it is scheduled to launch on May 26 at 2:00 p.m. CST Asia. There was some confirm teased that seems to be quite promising so let’s take a closer look toward the device and know more about it. 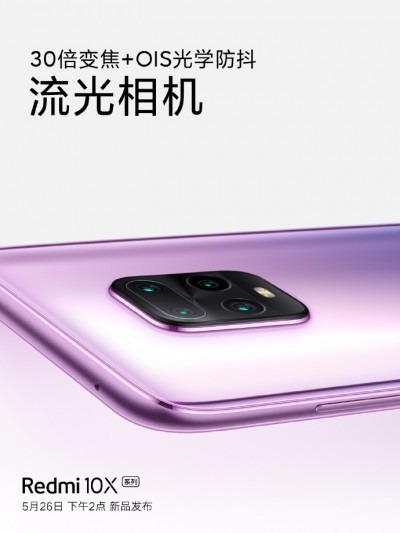 First thing first this device is a major smartphone upgrade specially designed for zooming capabilities, where is the device is also going to be quite powerful. As the device is already confirmed some of its key specifications such as its MediaTek Dimensity 820 mobile processor that supports dual-mode 5G connectivity on both SIM slots.

However the device is going to be countered with an angular display panel including an optical in-display fingerprint scanner for your biometric authentication privacy. The rear panel of the device seems quite interesting with and text and pattern around the device. as we mention the device is going to support incredible 30x zoom alongside support for stabilization.

Redmi 10x will initially come with four different color variants following Blue, Gold, purple, and white color option. Which of the device is going to pay with a 6gb of Ram and some suggest there is 8GB of RAM memory configuration following the 8/128GB and 8/256GB variant.

Thanks for being with us we would like to know your valuable feedback if there is any query share with us in the comment section down below. Stay tuned for more for the updates future on same.