Oppo upcoming budget centric affordable smartphone, the Oppo A93 likely to be rebranded oppo A93; hence the Oppo F17 Pro launched in India as a mid-range smartphone. The device seems to be quite promising so let’s take a closer look at the device and know more about it.

Oppo A93 Key Specification and highlights

We are starting with the device notably quite identical to the Oppo F17 Pro, Whereas the device having a punch-hole camera cutout placed on the upper left corner of the device. Moreover, the device also had a Quad Square camera module so far. Likely, the device to be featuring a Magic Blue and Matte Black color option. 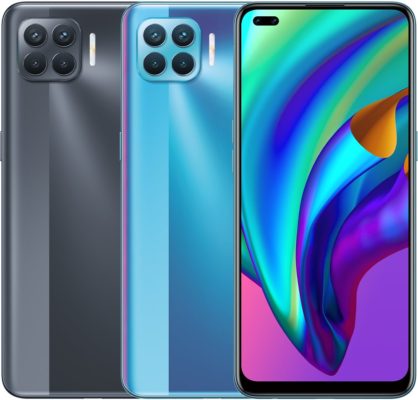 First thing first, the device is going to become with a 6.43-Inch of display panel featuring a Full HD+ display that offers a Full HD+ pixel resolution alongside a 60Hz of screen refresh rate. In terms of camera performance, the device going to be having a dual punch-hole camera include a 16MP + 2MP Selfie shooter.

On the other hand, the device having a Quad rear camera module housing a 48MP Primary + 8MP ultra-wide-angle lens + 2MP Macro + 2MP Depth sensor. Furthermore, the dimension of the device was measured as 7.48mm thick and 164 grams weights.

Under the hood, the device is going to be powered by MediaTek Helio P95 Mobile platform based on an octa-core CPU paired with an 8GB of Ram and 128GB of onboard storage. Further, you can expand the storage using a dedicated microSD card slot.