Oppo A53 scheduled to launch on August 25: Key specs and more

Oppo announced there Oppo A53 budget affordable smartphone, the Oppo A53 and the device was initially expected to arrive in Indonesia. Whereas, Oppo confirmed the device to be launch in India on Flipkart on August 25th. Although, the device also listed on Lazada with its key specification. The device seems to be quite promising so let’s take a closer look toward the device and know more about it.

Oppo A53 key specification and highlights

Oppo A53 is going to become with a 6.5-Inch of an LCD display panel with an HD+ display panel. Meanwhile, it is also having a punch-hole camera cutout placed on the upper left corner of the device. Not to mention, the device has quite narrow bezels surrounding the display of the device so far. 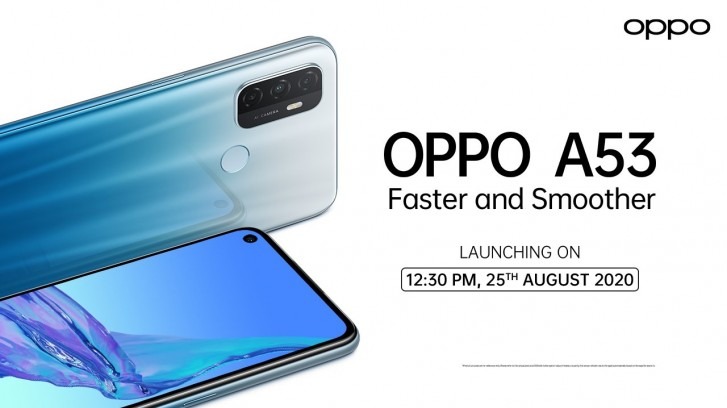 Under the hood, the device is going to be powered by Qualcomm Snapdragon 460 Mobile platform based on octa-core CPU integrated with an n Adreno 610 GPU paired with a 4GB of Ram and 125GB of onboard storage.

The price of the device would be starting at $120 as expected in India the device could be starting price at INR 12,999 for the 4/64GB memory configuration. The device will initially come in two different colour variant following the Electic Black and Fancy Blue colour option along a gradient finish utilizing the Dark Blue and White.

Reportedly, Realme Narzo 20 might launch in India in September