Oneplus has recently switched its aimed from Flagship Killer to Flagship smartphone Experience, Which not likely Oneplus initially aimed for. However, Some reports suggested they want to refresh their smartphone series hence there upcoming smartphone again going to be flagship killer but with a new series. Whereas, the Budget smartphone start boiling with the aggressive flagship killer offering from Redmi and Realme so far. Meanwhile, They have packed Top-Notch eliminating the flagship such as Samsung’s most selling smartphone were Samsung Galaxy A, and M Series globally confirm users going for the best possible option.

Oneplus is going to introduced there latest Oneplus Z Series and the device have been confirmed, Sice the internal model number of the device “AC2003” listed on Several Reports. Meanwhile, The device recently spotted on Geekbench benchmarking a Performance testing website suggested the device exists. Whereas, Under the hood, the device is going to be powered by Qualcomm Snapdragon 765G Mobile Platform. 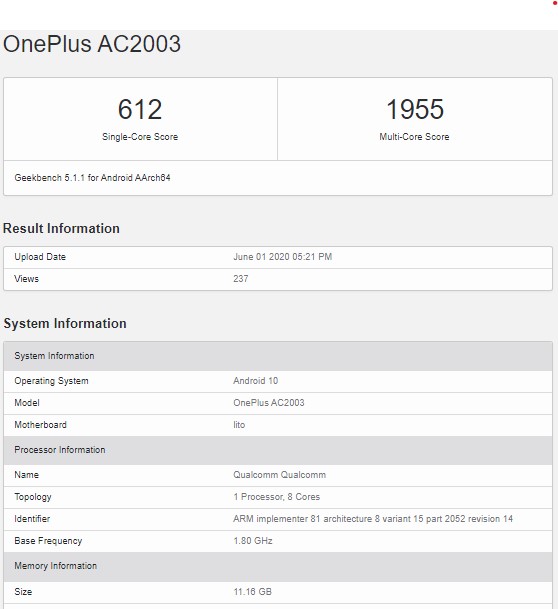 On the other hand, They have recently launched there Oneplus Bullets Wireless Z hinted already they were going to stay focus over a Budget and affordable offering. Moreover, the device has been initially scheduled to launch the device in July but due to the ongoing Global Outbreak of Coronavirus situation suggesting a delay in launch. Notably, the device is been running on Android 10 based Custom Skin OxygenOS out of the box.

Furthermore, the device motherboard packing an Octa-Core CPU and it was clocked at 1.8GHz. Therefore the Motherboard mentioned a “Lito” and the chipset of the device paired with a 12GB of Ram. The special mention “Lito” also found on the Oppo Reno4 confirmed the Device is going to share a Similar hardware Key specific so far as Oppo is Sister company. Obviously, According to Report, the Oppo Reno4 is to be powered by Snapdragon 765G featuring a 12GB of Ram.

On the other hand, We have also reported the device is going to have a flat display panel and it still going to be immersive. This is because the display is to be used as the AMOLED Display delivering an optical in-display fingerprint scanner. We believe Oneplus planning to take over the Budget Segment device in a Way to compete against the existing crown holder Realme, Samsung, Redmi. Unfortunately, there are no further details available about the device but we believe more news is about to surface in a couple of weeks.