Nubia is working on its Upcoming Flagship Gaming Smartphone, which is expected to launch this year. The Device is been Surfaced online and Nubia CEO Ni Fei Revealed details about the Nubia RedMagic 5G Gaming Smartphone. 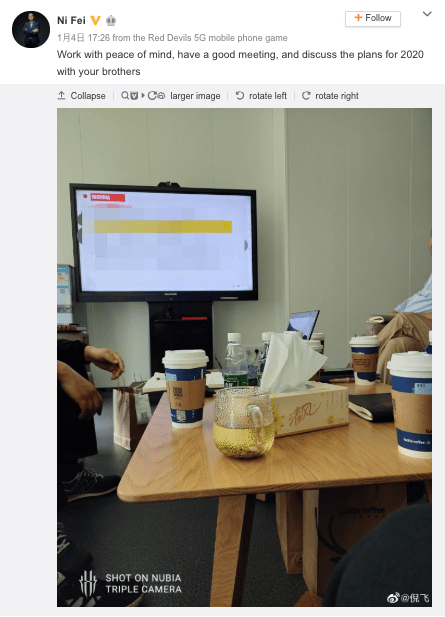 Under the hood, The Device will be powered by Qualcomm Latest Snapdragon 865 Soc. Whereas, it is expected the device to support a Dual Mode 5G (SA/NSA). It could be the first gaming smartphone to support 5G Dual Mode.

Furthermore, There Will be an Octa-Core Snapdragon 865 based on 7nm FinFET using an ARM Cortex-A77 performance Core along a Three Kryo 585 Cores set to clocked at Maxximum of 2.4GHz. It Includes an Other Kryo 585 Core to clocked at 2.84GHz and the Kryo 585 ARM Cortex-A55 provides a Maxximum Clock speed of 1.8GHz. We Belive Chipset paired With Adreno 650 GPU offering a 25% Better Performance compare to its predecessors.

However, The Soc up to Could With 16GB of LPDDR4X Ram at 2133MHz and LPDDR5 RAM AT 2750MHz. Apart, The Chipset required an External model for 5G meanwhile it using a Snapdragon X55 5G Modem for mmWaves and Sub-6GHz 5G Connectivity. Which promise to deliver a Speed of up to 7.5Gbps and Upload Speed of 3Gbps. Even there is a 5th-Gen AI Engine Hugged with Hexagon Tensor Accelerator gives a 15TOPs Computing power.

The Device includes a HUB AI Engine for a Highly accurate voice recognition and always-on Contextual awareness for smart virtual assistants. Not to Mention, The device offering a Latest Snapdragon Elite for enhanced gaming Experience. To charge the device, its possibility supports Quick Charge 4+.

In terms of camera performance, The Device Will having a Triple Rear camera sensor. It is Revealed by Ni Fei by posting an image on Weibo using “Red Magic 5G Gaming Smartphone”. Meanwhile, the triple rear camera suggest by a Bottom left Watermark “SHOT ON NUBIA TRIPLE CAMERA”.