Nokia Upcoming Smartphone, The Nokia 1.3 With an Internal Model Number TA-1207 is been certified on FCC (Federation of Communication) in the USA. This device aimed for a Budget Smartphone. This Device is a Successor of Previous Nokia Smartphone.

According to the Certification the Dimension of the device measured as 146.56mm x 70.46mm and it Comes With a Display Size of 5.7 to 5.8-inch Display. Where the Device having an offer a Decent Specification and it to be run on Android 10 based Stock Android Under Android One Program. This Device Sport Similar Design Language.

According to Report, The Device Equipped With a 2920mAh Battery With a 2.85V Nominal Voltage. Meanwhile, The Device could be powered by Qualcomm Snapdragon 215 Soc Coupled With at least 1024MB of Ram. Likely, The Device Will be launch imminent and the device to be comes later in Q2 of 2020. 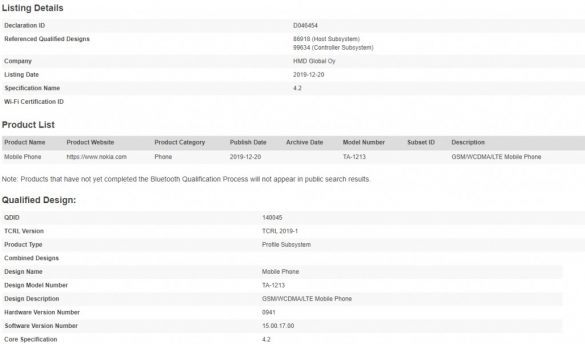 On the other hand, The Nokia 2.2 launched With 5.71-inch HD+ Display With a Pixel density of 295 PPI of 19:9 aspect ratio. Where it is Powered by MediaTek Helio A22 Coupled With PowerVR GE320 GPU paired with 2/3GB of Ram and 32GB of onboard storage. As for Camera, There is a 13MP f/2.2 and 5MP Selfie shooter. The Nokia 2 is an Entry-Level Smartphone and the Device Run on Android 10 (Android GO) out of the Box. Unfortunately, There is No Further information and details available at this moment.

As for Connectivity, The Device having a Wi-Fi 802.11 b/g/n, hotspot, Bluetooth 4.2, A2DP, A-GPS, GLONASS, BDS, FM radio and finally a micro USB port. On the other hand, There Will be a 2 Year of Warranty for an Android Update. However, The Device Will be available in India for Sure but initially it will available in USA and China.

Thanks for being with us, Share your Valuable opinion and Feedback in the comment section down below. Stay tuned for more further updates in future on same.

Samsung Galaxy A11 comes with Punch-Display and Quad Cameras