Motorola is all set for the launch their flagship smartphone Motorola edge and edge+ 5G. Likely, Where the launch event is not scheduled on April 22nd. However, there were some reports appearing on the Geekbench ahead of an official launch that summed up its specifications.

The device has been listing on Geekbench benchmark version 5. Where the report suggests that the device achieve 505 and 1410 points in single-core and multi-core performance test respectively. Not to mention the device is a flagship smartphone that has a top-notch hardware configuration.

Under the hood, the device has powered by Qualcomm Snapdragon 765G mobile platform coupled with 6GB of Ram whereas the chipset integrated with Qualcomm x55 model to support dual-mode 5G connectivity has standalone and non-standalone. 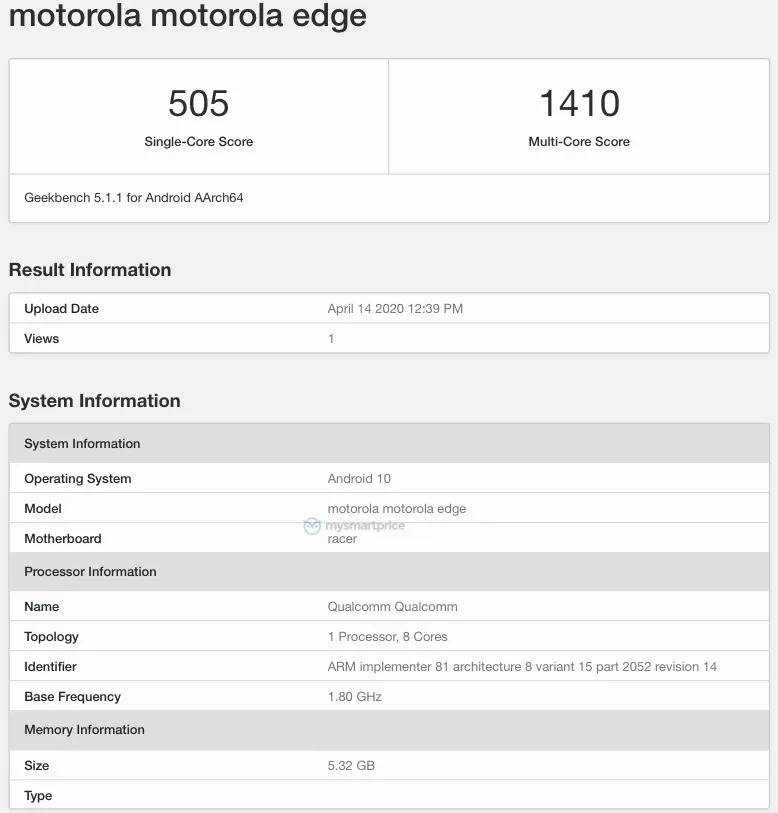 On the other hand, the higher variant notably Motorola edge+ set to Powerd by Qualcomm Snapdragon 865 integrated with the same Qualcomm x55 modem to support dual-mode 5G connectivity. It’s unlikely there were some more improvements, such as Bluetooth and Wi-Fi connectivity ranges alongside many more. Therefore they have also packed a powerful camera to deliver a quality image.

Likewise, the device will run on Android 10 under Android one program to feature and stock Android experience. Furthermore, there would be an in-display fingerprint scanner as biometric privacy security. Even the device would be one of the most screens to body ratio smartphone from Motorola.

Thanks for being with us we would like to know your valuable opinion feedback if there are any queries sure with us in the comment section down below. Stay tuned for more for the updates in future on same.