LG Upcoming device is been spotted on Popular Benchmarking website revealed some of the Key Specification of the device. The Device is Belonged to the Upcoming K-Series. LG Reportedly working on a New Series of Smartphone with a Name K43 for Budget range segment. They already losing a big market share, likely they have to boost their Mobile division this year.

The Device With an internal Model number LGE LM-K430IM listed on Geekbench. Where it Achieve an 823 Points in a Single-Core and 3908 in Multi-Core. While the device is running on Android 10 based Operating system. Under the hood, The Devic is Powered by MediaTek Helio P22 (MT6762).

Meanwhile, The Device supposes to be offering about the budget range device is already been announced in Mobile World Congress this year (MWC2020). On the other hand, The Flagship LG V60 ThinQ With a 5G Connectivity also announced in MWC 2020. According to Reports, The LG ThinQ 5G will be launched with an Upgraded Dual Display accessory. 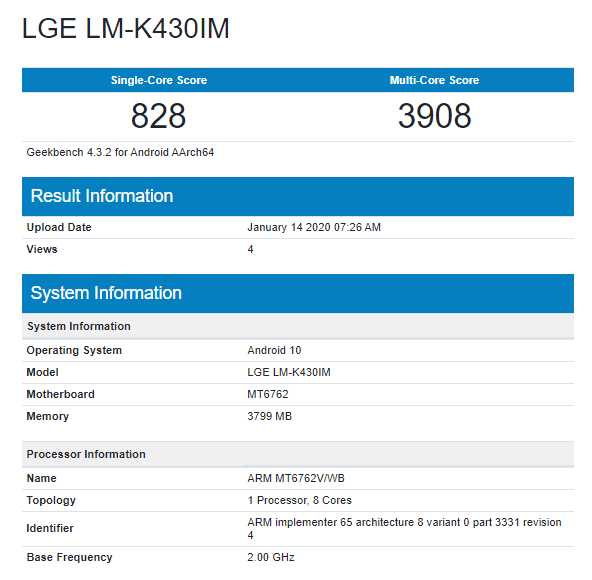 Unfortunately, There Were not a lot of od details available for the device but it might be powered by Qualcomm snapdragon 865 Soc paired with Snapdragon X55 5G Modem. Also, The Device could have come with a 6.4-Inch Full HD+ FullVision OLED Display featuring a 2340×1080 pixel of 19.5:9 aspect ratio and 2.1inch Mono Cover display Secondary display.

This Chipset is also used in Previous K40, LG K50 and K50s in the past. Furthermore, The Device possibility comes with a bigger, Waterdrop notch and Larger battery capacity. The Device Could be launched in Q2 of 2020 and Will arrive in Asian Country as Well.

Thanks for being with us, Share you’re more valuable opinion and feedback in the comment section down below. Stay tuned for more further updates in future on same.