IQOO Z1x will be an affordable gaming-centric smartphone, where the device likely to a budget 5G capable smartphone. The device is already scheduled to launch on July 2nd in chia. The device seems to be quite promising so let’s take a closer look toward the device and know more about it.

First thing first, the internal model number of the device was V2012A. While the device also appears on several certification authority such as 3C in China with the same model number. Even the deice appear on Geekbench performance site.

It will come with a 6.57-inch of display panel featuring an IPS LCD display panel. There it supports a 120Hz of screen refresh rate. Meanwhile, it includes a punch-hole camera cutout placed on the upper left corner of the device. 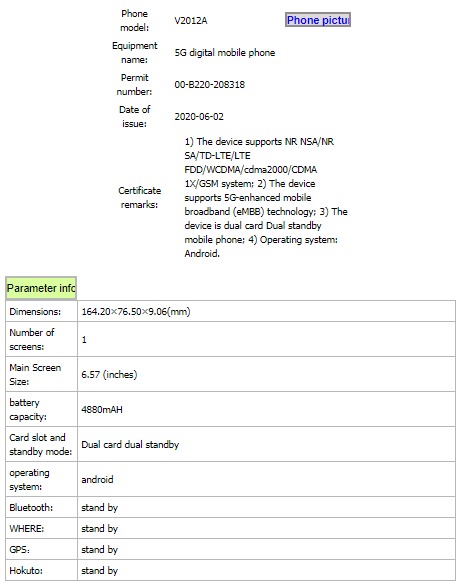 The dimension of the device measured as 164.20 x 76.5 x 9.06mm, and in terms of camera performance, the device will have a 48MP triple rear camera module placed on the upper left corner of the device.

Under the hood, the device is going to be powered by Qualcomm snapdragon 765G Mobile platform based on octa-core CPU. The chipset of the device paired with an 8GB of Ram and 128GB of onboard storage. Likely, there will be a lower 6GB variant.

Additionally, to power, the device is equipped with a 4800mAh battery using a 33W of fast charging solution bundled in the box. Furthermore, earlier leaks suggested it could deliver with a 5000mAh battery. Unfortunately, there are no further details available about the device so far.

Motorola One Fusion+ Key Specification and Price leaked ahead of launch