IQOO upcoming gaming-centric smartphone, the device has appeared on TENAA certification website of china. Where the device spotted with the internal model number V2019A. Meanwhile, the device seems to be quite promising so let’s take a closer look toward the device and know more about it. 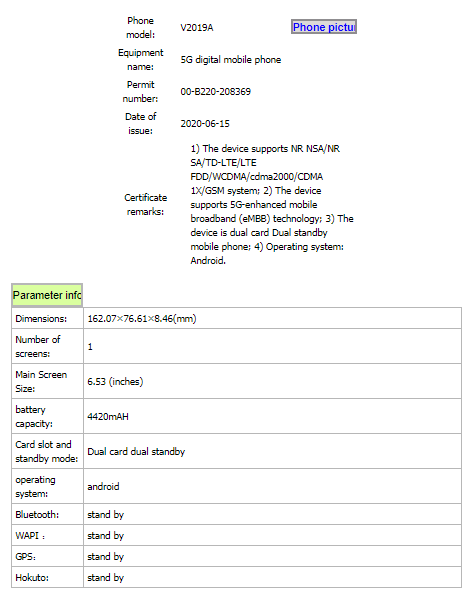 The device was also spotted on the 3C certification website of china. Therefore, the device is going to be quite identical to some Vivo Smartphone, notably a rebranded smartphone. Therefore, we don’t know the design elements of the device as of now.

According to reports, the device is expected to be priced at 1598 Yuan not to mention the device initially going to launch in China. Thereafter, the device most likely to arrive in another regional market. On the other hand, China already has a 5G mainstream infrastructure; hence other regions don’t have any mainstream 5G Connectivity.

As the reports suggested the dimension of the device was 162.07 x 76.61 x 8.46mm and the device definitely going to include a camera bump. Moreover, the device will become with a 6.53-Inch of IPS LCD display panel with having a punch-hole camera cutout placed on the upper left corner of the device.

Additionally, the device is going to be equipped with a 4420MAh battery and the device most likely to have an 18W fast charging support bundled in the box confirmed through a 3C certification. The device will be running on Android 10 based custom skin out of the box.