HTC is working on its new smartphone, the HTC desire 20 Pro. The device is spotted on the popular Geekbench benchmark website reveals the sum of its key specification. So let’s take a closer look at the device and know more about it.

The device itself looks quite promising and elegant; the internal model number of the device is HTC 2Q9J10000. While the code name of the device is Bayamo. Likely, HTC is working to regain its market share before it loses to a complete market scenario. Moon over the device is going to look like Xiaomi MI 10 on The panel of a device.

I thought HTC is dead… But HTC Desire 20 Pro is in the pipeline… Design is kind of a mix One Plus 8 on the front and Mi10 on the back… Yea, 3.5mm audio jack is there, lol😅

However, the device is also having, and punctual camera cutout placed on the upper left corner of the device. As for the friend, the device is quite identical to the one plus 8 suggestings.

Furthermore, where a lot of smartphone manufacturer is eliminating the 3.5 mm audio jack; instead, HTC has been going to continue with a 3.5 mm headphone jack. As the device has been spotted on the Geekbench benchmark, it suggests the device belongs to the mid-range smartphone. 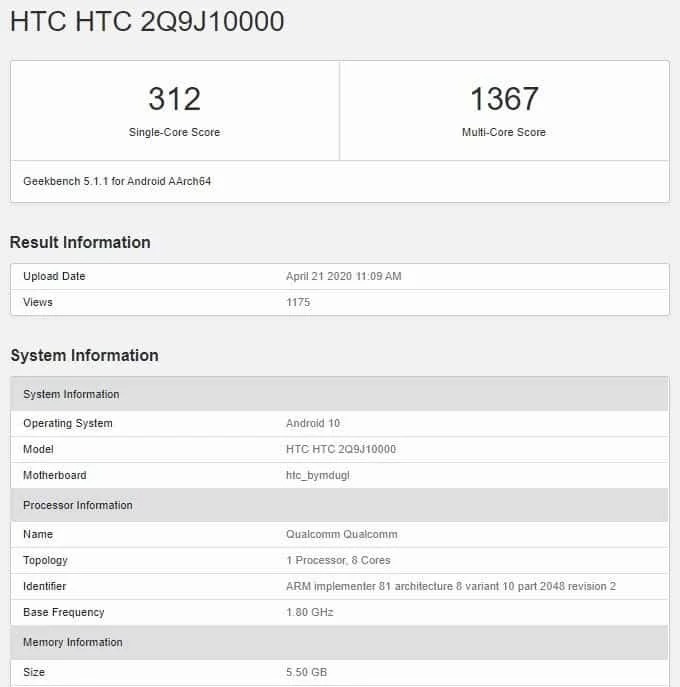 Most likely, the device is going to use the MediaTek helio g80 or Samsung Exynos 9611 to power the device. Moreover, the device is also expected to be powered by Qualcomm Snapdragon 660 or 665 mobile processor based on the performance test achieved by the smartphone having the same result.

Therefore the device achieves a score of 312 and 1367 points in single-core and multi-core performance. The chipset of the device has been paired with 6gb of Ram. Likewise, there would be more variance that has been going to debut within the market.

Unfortunately, there are no further details available about the device. Likely the device is going to launch imminently. Thanks for being with us we would like to know your valuable opinion and feedback if there is any queries share with us in the comment section down below. Stay tuned for more for the updates in the future on the same.