Honor X10 and X10 Pro Key Specifications and likely to be launch in July: Report

Honor upcoming smartphone would be on extend Pro and it is and successor of Honor 9X and Honor 9X Pro. The device used to be quite promising so let’s take a closer look towards the device and no more about it because there was some key specification and the release date has been Certificate online.

There was a lot of smartphone from Honor has been scheduled to launch but due to the global outbreak of coronavirus, the launch might be a delay. Moreover, the Honor 30 Lite is also suggesting to be launched in the near future.

This device will come with and 6.63 inches of the LCD display panel. Under the hood, the device is going to be powered by Huawei In-house Kirin 820 5G mobile processor based on octa-core CPU used to be clocked at 2.36GHz and integrated with a Mali-G57. 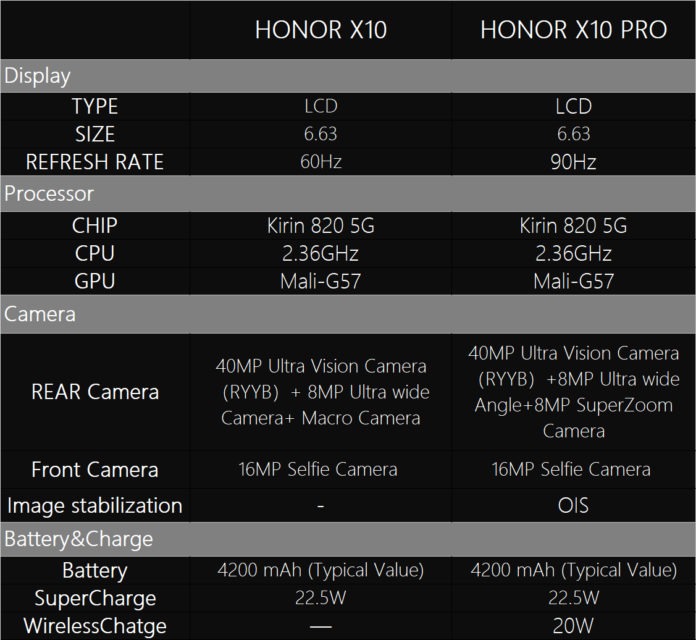 Not to mention, the device will have and 40-megapixel Ultra vision primary RYYB Camera sensor + 8-megapixel Ultra wide-angle lens + macro lens. While the front having and 16-megapixel selfie Shooter, to power the device attitude with a 4200mAh battery using a 22.5W fast charging solution bundled in the box.

It comes with 6.63 inches of LCD display panel featuring a 90Hz of screen refresh rate. Therefore the device is being powered by Kirin 820 5G mobile processor based on octa-core CPU clocked at 2.36 gigahertz frequency Integrated with a Mali-G57 GPU.