A Mysterious smartphone from Asus has been spotted on Geekbench performance website, Where the device reportedly named Asus ZF. Meanwhile, there is no reported have been surfaced before as it was an early leak of the upcoming Asus ZF device so far. The device seems to be quite promising so let’s take a closer look toward the device and know more about it. 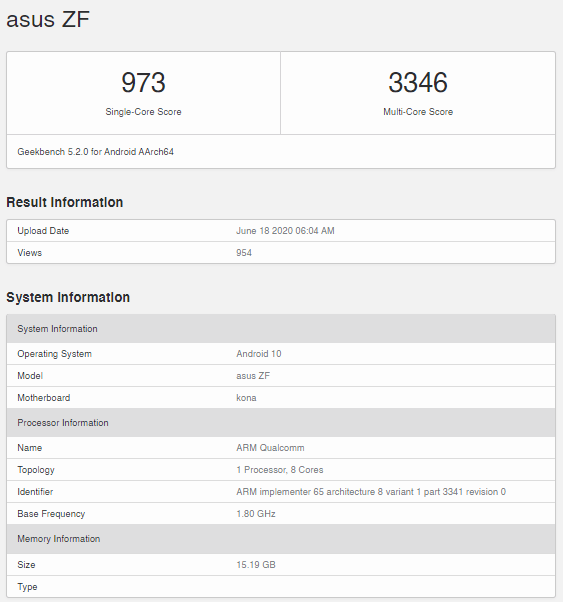 First thing first, the score of the device was 973 and 3346 points in a single and multi-core performance test. Whereas, the device reportedly suggested it should be the Asus ROG Phone 3. Whereas, that device spotted several times with the internal model number ASUS_1003DD listed on TENNA Certification authority of china.

Furthermore, this device could also be the Asus Zenfone 7 Series. Under the hood, the device is going to be powered by Qualcomm Snapdragon 865+ paired with an up to 16GB of Ram. Whereas, the Asus Zenfone 6 debuted with the 8GB of Ram. Also, the device seems to be quite a major successor compare to it. As the device spotted on Geekbench suggested being launch quite imminent.

Unfortunately, there I no further details available about the device so far as the device likely to be quite immersive. Meanwhile, we can’t share until the model number, and the marketing terms clarify. Thanks for being with us. We would like to know your valuable opinion and feedback if there is any query share with us in the comment section down below. Stay tuned for more further updates in future on same.